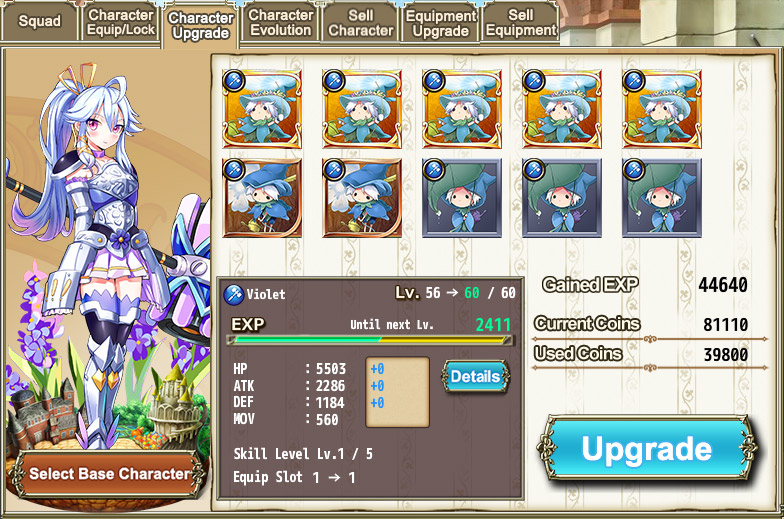 Once a character has gathered a certain amount of experience, she will level up and her Stats will increase.
The 3 Stats which can be increased are: HP, Attack, and Defense.
The amount varies from character to character, but those with high rarity tend to see a greater increase.


Skill Leveling through Character Upgrade:
Only characters that have the same Skill as the base character can be used for Skill Leveling, however Skill Levels are not guaranteed to increase. The higher the Skill Level, the lower the chance of an increase.
Alternately, you can use ▽Skillblooms which will guarantee a Skill Level up.
* For a list of Skills, please refer to this page.

* Locked (protected) Characters cannot be used as materials. Character Upgrade consumes Coins, based on the level and evolution stage of the base character. The higher their level, the more Coins are needed.

These Materials give large amounts of experience.

These Materials guarantee an increase in Skill Level.

The following is a tabulation of the experience and gold requirements for leveling your knights. The left and right columns under each rarity represent the amount of experience required for reaching the next level and the total amount of experience obtained up to and including that level, respectively. Cumulative experience values for max levels (before and after evolution) are placed in bold. The gold usage columns represent the amount of gold used per upgrade material.
*Maximum Level increases by 10 following evolution. Gold and Rainbow units can reach level 80 after blooming.

Raise the stats of your Base Character by selecting Special Material Characters called (▽Ampy Beasts) during Character Synthesis.
The 3 Stats which can be increased are: HP, Attack, and Defense. There is a specific Ampy to raise each stat.

Stats Up Limits
Each ampy can be used on a single character 100 times. The limits for each character are as follows:

These Characters gives experience and raise one of Stats 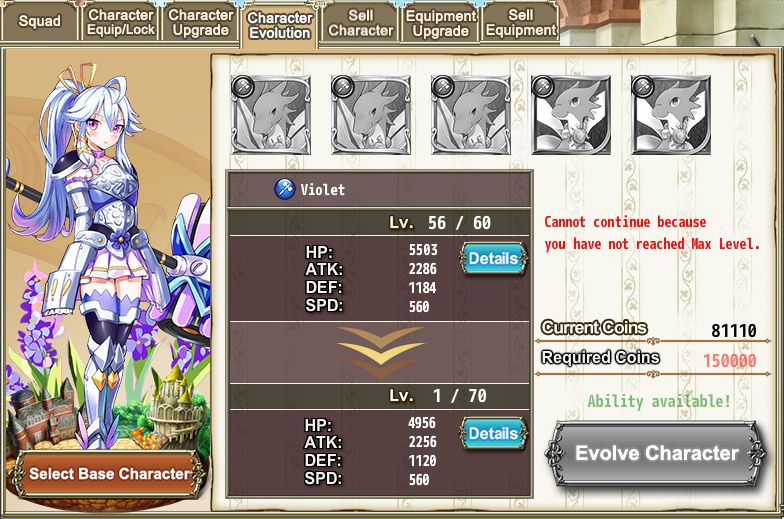 Raising a Character’s level to its maximum allows you to perform a Character Evolution.
Evolution increases the maximum level and reverts the Character back to level 1.
Raising a character after evolution is more difficult, however, the increase in stats makes it more powerful!

In order to perform a Character Evolution you must meet all the conditions below:
1. Your Character must be at maximum level.
2. You must have the necessary Evolution Material Characters (▽Bloom Dragons) in possession.
3. You must possess more than the necessary amount of Coins.

Some characters learn new Abilities upon Character Evolution.
Evolving Characters will also double their Bonus Affection stats, so Evolve all of your favorite characters!

* Evolution Material Characters used must be of same class as base Character.


For each rarity there is different amount of Evolution Material Characters and Coins needed for evolution:

These Characters are used in Evolution 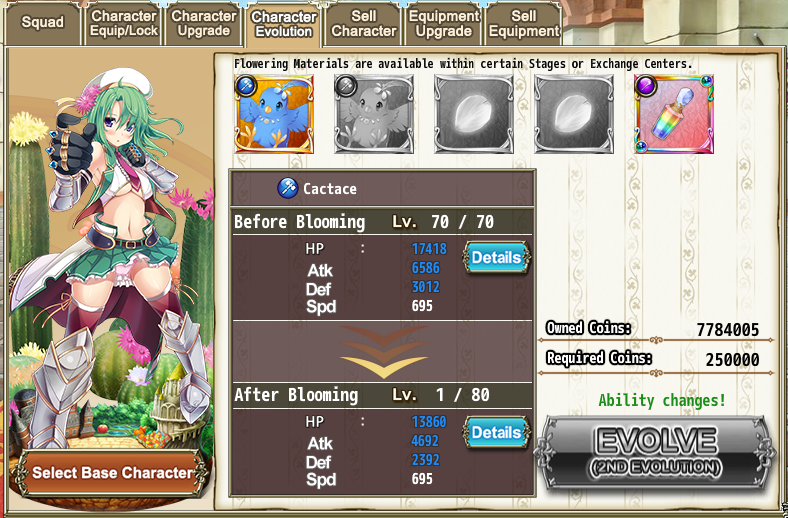 Raising an evolved Gold or Rainbow character’s level to its maximum (70) allows you to perform a second character evolution called Blooming.
Blooming increases the maximum level to 80 and reverts the character back to level 1.
While your stats will not increase as much as with evolution, Blooming dramatically improves your units, providing new abilities while often upgrading their current ones too. Gold Units will generally learn one new ability from Blooming. Rainbow units will usually learn two. There are exceptions.
The requirements for Blooming is much more complex than evolution, requiring proper Bloom Birds, Nation Petals, and Rarity Elixir.

In order to perform a Character Evolution you must meet all the conditions below:
1. Your Character must be a Gold or Rainbow unit at maximum level (70).
2. You must have the necessary (▽Blooming Character Materials) in possession (You can store bloom materials in the warehouse). The required materials are: 2 Type-matching Fururu Blooming Birds, 2 Nation-matching Nation Petals, a Rarity-matching Blooming Elixir needed.
3. You must possess more than the necessary amount of Coin. (Gold: 200,000 Coin | Rainbow: 250,000 Coin)
4. The character must have her bloom implemented into the game!

These Materials are needed to complete Blooming Evolution 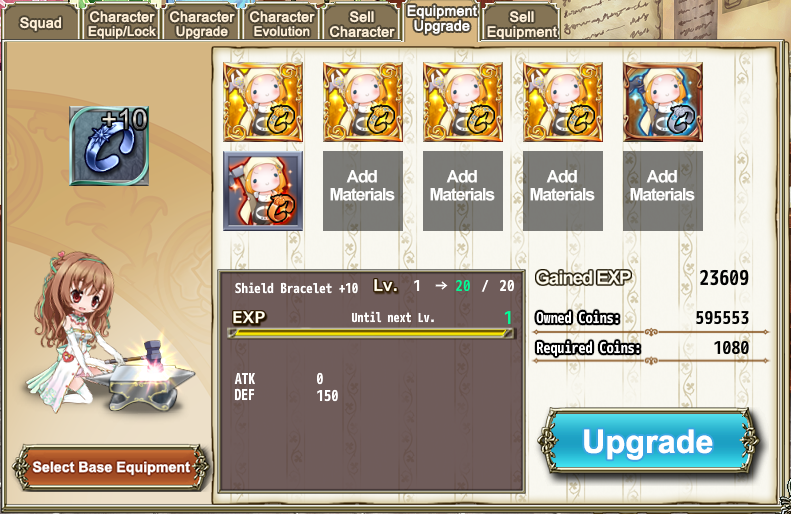 Equipment Upgrading is available to the Player once they have reached Level 40. Similarly to Character Upgrading, its purpose is to Level up a piece of Equipment so that its stats may increase. Equipment have just two stats: Attack and Defense. They can be equipped to a Unit so that their Attack and Defense may increase as well. Upgrading Equipment with other Equipment, even of the same type, is almost never worth it. Instead, Equipment materials should always be used.

* Locked (protected) Equipment cannot be used as materials. Equipment Upgrade consumes Coins, based on the level and evolution stage of the base character. The higher the level of the Equipment, the more costly upgrading becomes. Additionally, all Equipment materials can be stored in the Equipment Warehouse which has a starting storage space of 200.

These Materials gives large amount of experience to equipment to Equipment regardless of Equipment type. 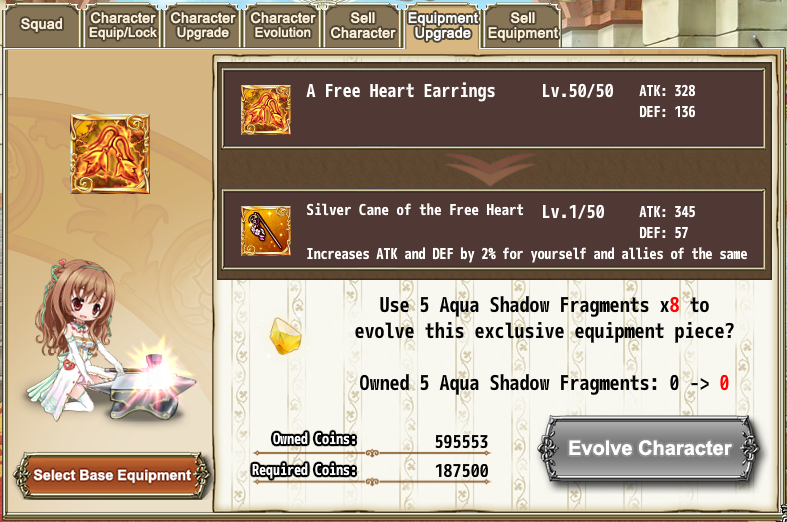 For each Rarity, there is a different amount of Aqua Shadow Fragments and Coins needed for Evolution:

These Materials are used to Evolve Character Exclusive Equipment.

Pages in FKG:Upgrade and Evolution

Link here from this web site

Link here from the web