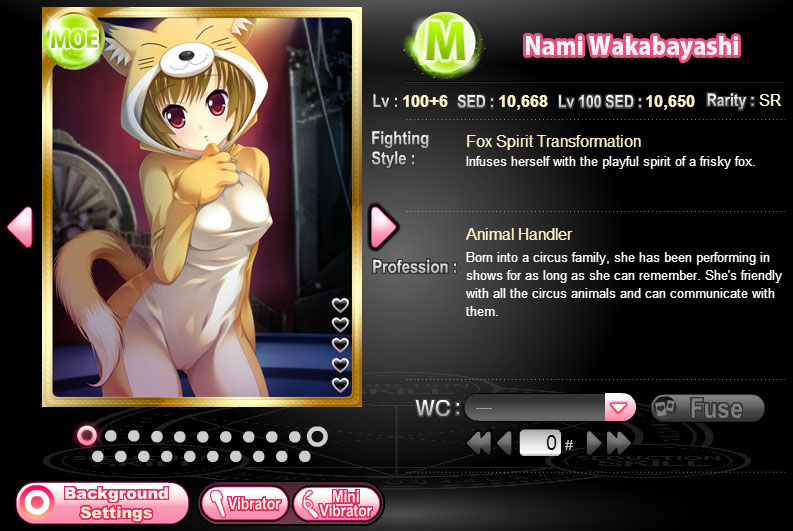 Rarity:
The rarities are N (pink border), R (silver border), SR (gold border). The higher the card's rarity, the higher its maximum SED will be once it reaches level 100.

Type:
Cards have a type either Moe, Babe or Sexy, which has only little impact.
Moe cards have a faster growth in early levels, Babe are regular, Sexy grow faster on late levels. See Level paragraph below.
In some events the type can have an impact so refer to the events descriptions.

Level:
A card's level can rise to a maximum of 100, regardless of rarity. SED increases in accordance with level, and the illustration cards will change.
You can level up a card by fusion with a duplicate or with a Wildcard.

Ex Level:
Ex-levels refer to levels above 100 for cards. They are displayed on the profile with +X where X is the number of Ex levels of the card. Each EX Level increases a Card's SED Power by +3.
The cards are leveled up above 100 (ex levels) by fusion with a duplicate or by using Ex-Wildcards.


Fusion:
If you win a card you already have during Explore (Chance Time), they will automatically fuse and level up.
If this Card was already at maximum level, you get an amount of Pero instead.
Normal Card: 300 Pero, Rare Card: 700 Pero, SR Card: 1500 Pero.

If you win a card you already have during Gacha (Chance Time), they will automatically fuse and level up.
If this Card was already LvL 100 or ex you get:
1. (If you didn't unlock EX Levels) a LvL up of another Card contained in the Gacha. The leveled card is most often of the same Rarity but there is a small chance its Rarity is higher instead.
2. (If you unlocked EX Levels) +1 to their EX Level
3. (If everything is maxed already or you reached your EX level limit for the won card) a Wild Card of same rarity

Because of the Gacha's mechanics, N gacha can easily level up R or SR cards if most or all N cards are level 100 and the player did not unlock Ex-Levels yet.

Link here from this web site

Link here from the web